“Are you going all the way to the top?” The question rang out from a ponytailed, shorts-and-T-shirt-clad tourist who was on his way down. It was a common question. And it is one that always annoys me because it doesn’t make any sense. On so many hikes and trail runs, there is no “top.”

We were trekking into Bridal Veil Basin, a lofty and rugged wilderness above Telluride. There are towering rock spires, babbling brooks to rock-hop across, lingering pockets of snow, the twisted metal of mining ruins, ridgelines, saddles and sweeping vistas. But there is no top. No summit to speak of.

We began the day not with a drive to the top of Bridal Veil Road, but from our home in town. Wanting to be purists, nothing would do but door-to-door on foot. So we ran the two miles on the River Trail to the end of the canyon, climbed two more up the switchbacks to the power station perched on the edge of a cliff near the falls, through the gate and into the basin. 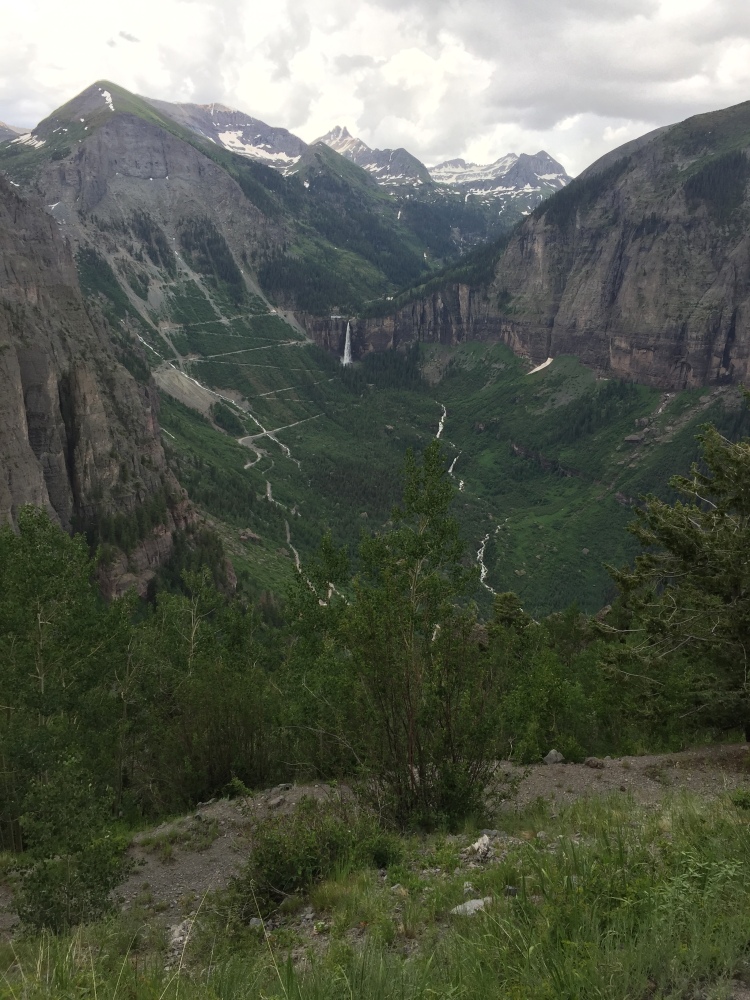 We were on our way to the neighboring mining town of Silverton. Our packs were light and all we carried was food, water and a change of socks and underwear. “Credit card camping” we called it.

The skies threatened rain, but the verdant hillsides were covered with an array of blue columbines, orange paintbrushes and yellow mules ears. The trail petered out at one point and we found ourselves on the wrong side of a rock outcropping. No matter. We tramped through the alpine meadow until we found the trail again. With the terrain so open and expansive, it was impossible to get lost because you could see where you needed to go.

We took a left at an unmarked trail junction and climbed to the ruins of the Lewis Mill. The five-story looming wooden structure was a state-of-the-art ore concentration mill when it was built in 1910. Now the restored building attracted hikers to gape at the absurdity of an industrial behemoth in the middle of a backcountry basin. We took a minute to wander among the rusty ruins and then continued up to Lewis Lake and Columbine Pass at 13,058 feet. 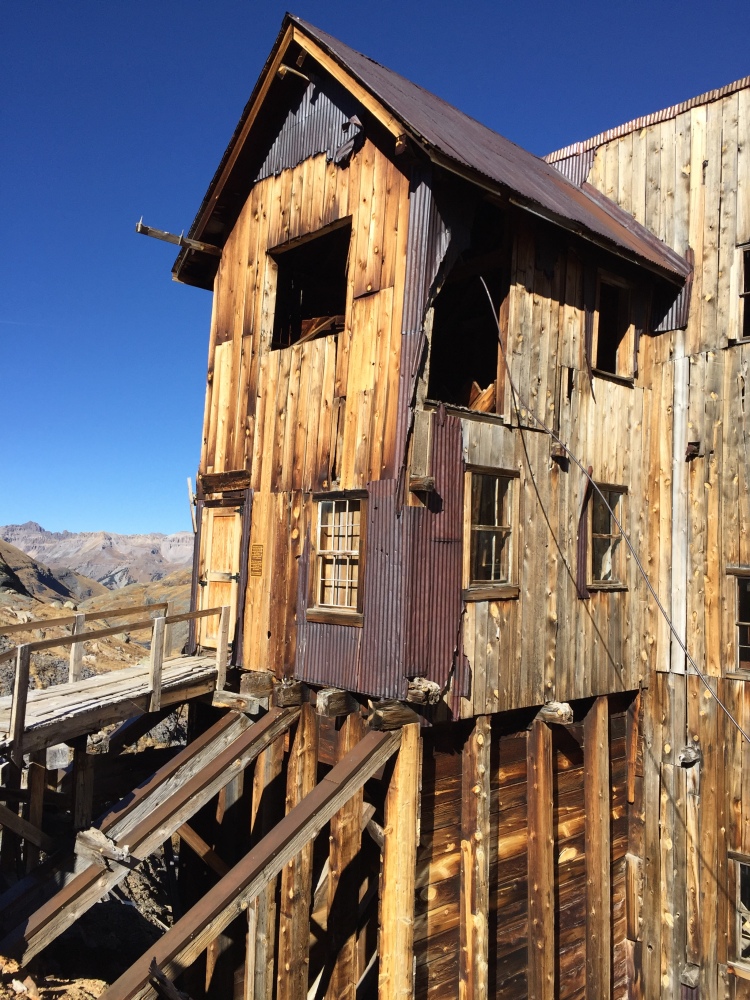 We admired the cerulean waters of Columbine Lake and started down the other side on a long, rolling downhill. The trail traversed around the basin and through thick spruce forests before dumping us out on Ophir Pass Road. We took the dirt road to its junction with U.S. 550, crossed the highway and searched through the underbrush until we found a little-used trail that parallels the road and would take us the final three miles into Silverton. 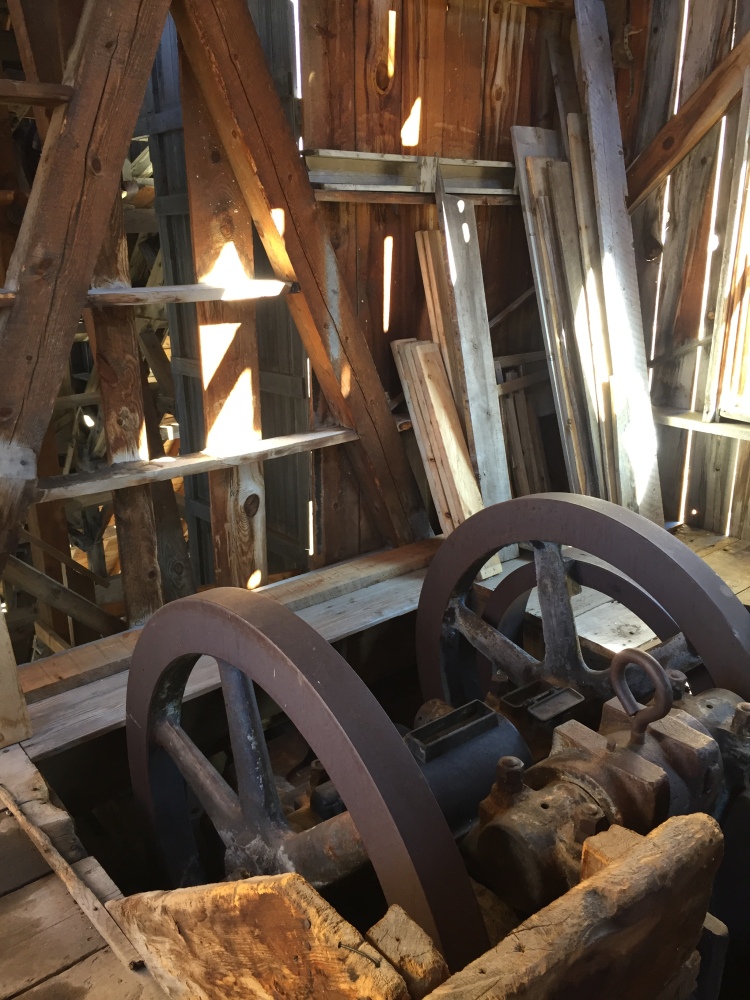 After a few drinks and snacks at the rum bar, we checked into the historic Grand Imperial Hotel, showered and made plans to head down to the hotel’s restaurant for a proper dinner. But, exhausted after our roughly 27-mile run, we fell asleep instead.

“You have to smile more,” I said. “Look friendly, like we aren’t murderers.” I plastered a big, shit-eating grin on my face as I stuck out my thumb. It was 8 a.m. and we stood on the shoulder of the highway, just outside of Silverton. We had decided to cut out a few miles of potentially dangerous highway running and catch a ride to the top of Red Mountain Pass and come back to Telluride via Black Bear Pass. Our grinning worked. The next car pulled over.

It was a sedan loaded down with camping equipment in the back seat and two college-aged girls in the front. They were headed to Mineral Creek campground about two miles up the road. Not far enough. We thanked them and watched them drive away.

From the gas station across the street a man with a grey beard and an old, blue pick-up truck motioned us over to him. He was headed to Ouray and could drop us at the pass if we didn’t mind cramming into the front on the bench seat. We clambered in. As we drove off, the cab filled with the smell of stale beer. I looked at the floor, expecting to see empty cans rattling around.

“So what were you doing in Silverton?” Mike asked the man. He told us he was a miner (a real live miner!) at the newly re-opened Camp Bird Mine and came to Silverton for the night “to do some drinking,” thereby solving the mystery of the alcohol smell. At least he was honest. Worried we were now riding with a still-drunk driver, I searched for a seat belt. No such luck. But it didn’t matter. Our driver ferried us the eight or so miles to the top of the pass with ease, rounding each corner slowly and smoothly on a road he had probably driven thousands of times.

We hopped out at the pass, thanking the miner for the ride. We briefly wondered if we should have given him some money for his trouble, but decided that paying is not in keeping with the spirit of hitch-hiking. It’s about good karma and doing a favor for a stranger. We resolved to pay it forward as soon as we could.

The pass road was windy and Jeeps, laden with passengers, passed us every few minutes, kicking up dust that swirled around us. One Jeep pulled over and rolled down its window.

“You guys are so impressive!” a tourist called out. “Thanks…?” we muttered and kept walking. “Are you going all the way to the top?” they asked. Mike and I exchanged glances. That question again. “Telluride,” we said, in unison.

If they are impressed by something as simple as people walking, using our legs as a means of transportation, they must lead pretty boring lives, I thought to myself. I didn’t feel flattered that they thought we were hardcore. I felt annoyed that trekking the same old, rocky mining roads that people, mules and horses walked a century ago was now viewed as exotic and extreme by lazy tourists. I felt like a spectacle. They drove off and we continued climbing up the pass.

It was even more windy as we started down Black Bear Pass. The one-way road snaked down across Ingram Basin, past mining trestles and tailings piles. We had just passed the infamous, rocky and steep “Steps” section of the pass and Ingram Falls when we spotted a green Jeep down off the side of the road, nestled among the boulders. Its windshield was smashed and it was facing back up the slope, as if it had rolled once and came to a stop. “Wow”, I said under my breath. We learned later the occupants were uninjured and the Jeep was towed out the next day.

We continued the last few easy miles back to town and ran straight to our favorite main street restaurant for burgers and margaritas. We overheard the foursome at the table next to us talking about the Jeep accident on Black Bear Pass and realized it was the same people we saw earlier who were so impressed by us. I tried to turn away, but it was too late. They recognized us.

“Hey!” they called. “You were the two we saw running the pass! I guess you made it to the top. Can we take your picture?!”

We relented and mugged for the camera, feeling silly and self-conscious, sweaty and dirty.

We lingered at the outdoor table, watching people walk by, enjoying the warm sun, heads fuzzy from the margaritas. We had run and hiked roughly 40 miles to Silverton and back, through the remote and stunningly beautiful high alpine of the San Juan Mountains. We explored the remnants of the region’s mining history, which linked us with the past and our miner forbears.

It was the first time we had run those sections of trail and seen those blue alpine lakes. We had depended on the kindness of strangers. We learned things about each other. We had gotten a ton of exercise and spent the majority of two entire days outside. The number of hours spent playing in the mountains is always the benchmark by which I judge the success of a weekend. I felt languid and content in the sunshine. We had finally made it to the top.